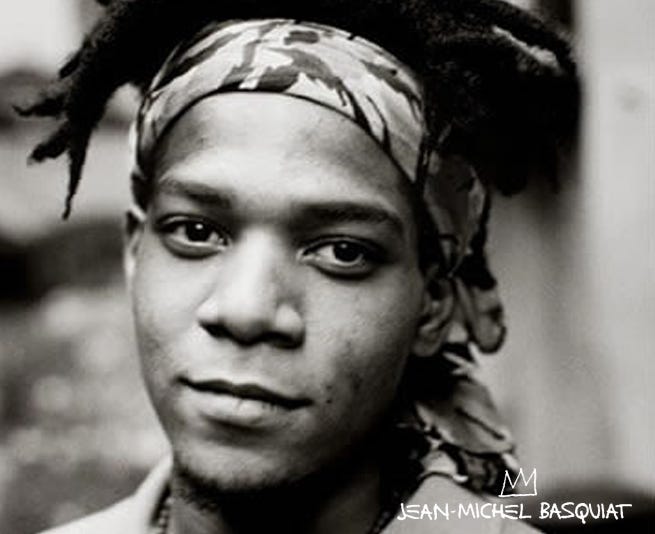 Jean-Michel Basquiat was a New York City born and raised artist, musician, and producer. As part of the street art group named SAMO, Basquiat took advantage of a larger exposure of his art. Their art was known for their enigmatic epigrams displayed throughout the streets of Manhattan’s Lower East Side. Basquiat art style focused on themes such as wealth versus poverty, integration versus segregation. His unique combination of text and image contributed to his fame. His pieces, such as Irony of Negro Policeman, were strongly political and direct in their address of power structure and systems of racism. Basquiat’s young life ended tragically at the age of 27. However, hundreds of artists still honor his risky and subversive artistic insight. His countercultural focus helped usher in the idea that street art was, in fact, real art. Moreover, his social commentary has had a lasting and powerful effect.

WHO WAS JEAN-MICHEL BASQUIAT?

As an incredibly influential part of the neo-expressionist movement, Jean-Michel Basquiat rose from the ‘punk’ scene of New York in the late seventies, early eighties, as a gritty graffiti artist, who then successfully transitioned into the professional, international art world at large. His work was critically and publicly celebrated, and Basquiat became one of the most commercially successful artists of the time.  His legacy lives on, even after his untimely death at the age of 27, due to an overdose in his studio loft in New York. Like the movement he helped usher in, he lived fast and died young.

Basquiat was born in Brooklyn, on December 22, 1960.  His family was of Puerto Rican and Haitian descent, and he was the second of four children. His mother, from an early age, instilled in him a love for art that never died and she always took him to art museums in Manhattan, as well as enrolled him as a junior member of the Brooklyn Museum of Art.  A naturally gifted child, Basquiat impressed those around him with his early attempts at creation and found that his art was encouraged universally.When Jean-Michel Basquiat was around eight years old, he was hit by a car while playing in the street. His injuries were extensive and eventually had to undergo a splenectomy. Bizarrely enough, this recuperation process was highlighted by the fact that his mother gave him Grey’s Anatomy to read while he healed – which went on to prove extremely useful and influential for his work.As he aged, Basquiat turned more rebellious and eventually dropped out of high school.  His mother, having gone in and out of mental institutions during this time, was unable to protect him from his father, who banished him from the house upon hearing that his son failed conventional schooling.  Basquiat survived this period on the streets, selling T-shirts and homemade postcards to make ends meet.

Basquiat and his friend, Al Diaz, made names for themselves spray painting graffiti on buildings in Lower Manhattan, under the group-tag of SAMO (Same Old Shit) in 1976.  Just two years later, in December of 1978, The Village Voice published an article about their collaborative graffiti (which, after the fame of being recognized, caused the two to split in 1979, ending with the words, “SAMO IS DEAD” inscribed on many buildings).This lead to media coverage and talk shows, but Basquiat’s own fame wasn’t solidified until the 1980’s which met his true breakthrough as a solo artist.  One of his masterpieces, Untitled [History of the Black People] was created during this time, in 1983. According to African Art History Professor, Andrea Frohne, the painting, “reclaims Egyptians as African and subvert the concept of ancient Egypt as the cradle of Western Civilization.” Basquiat was no stranger to controversy, and the impact of this piece was electric.Another masterpiece, Irony of Negro Policeman, created in 1981, is Jean-Michel Basquiat’s attempt to show how white culture controls and influences the minds of African-Americans. With the intention to show how, essentially, brainwashed African-Americans have become with the institutionalized, corrupt forms of power in America even years after Jim Crow had ended, Basquiat’s commentary gave the piece a reverberating force of will that truly withered the concept of the ‘black policeman’ – that is to say, an African-American being a tool of the white establishment.The greater irony and deeply saddening thought are that much of Basquiat’s commentary and critique of modern culture had gone unnoticed or deliberately evaded by critics.During this time, Basquiat had opened six solo shows worldwide and become the youngest artists ever to be included in Documenta – an international contemporary art show held every five years in Kassel, Germany. In this period of extensive creation, Basquiat is reported to have created around 200 original works of art and developed his signature motif: a heroic, crowned Black figure. Muhammad Ali, Sugar Ray Robinson and Dizzy Gillespie were all inspirational figures to him, and he captured their likeness in various sketches and portraits.

As if his own accomplishments weren’t enough, Basquiat also developed a friendship with Andy Warhol, and the two collaborated on a series of works from 1984 to 1986, one of such collaborations being, “Ten Punching Bags.” Warhol, as it was reported, would paint first, and then Basquiat would layer his own work over top. Honestly, the man’s talent and skill shone brightly.Basquiat’s influence is significant, and his critical role of ushering in the rise of Punk Art and Noe-Expressionism into the New York art scene remains a monumental accomplishment. Even if the larger public seemed to latch on to the exotic superficiality of his work, his commentary and insight remain timeless, and the breathtaking eccentricity of his work remains the work of a consummate genius.

Musart is interested in showcasing all kinds of art from a variety of different artists – Jean-Michel Basquiat is the perfect counter-cultural example that we love seeing. He not only helped usher in the idea of graffiti being legitimate art, but he also honed and focused his work to comment on society as a whole, very much like other movements at the time (punk, rap, etc.). It is important to remember Basquiat not only for his brilliant pieces, such as the SAMO graffiti or Untitled [Skull] but also for his social commentary, which can be seen in pieces such as, Untitled [History of the Black People]. Basquiat lived like his heart, like a fiery candle burning too bright, and we are honored to share his light with the world.