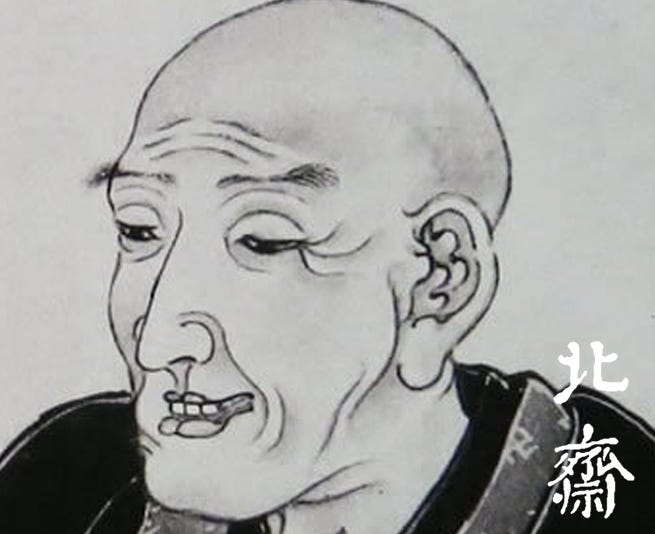 Hokusai was a Japanese artist, who was actually known by at least 30 different names throughout his lifetime. This was relatively common in his culture, although his names in particular directly related to his artistic production and style. He is most notable for his Ukiyo-e woodblock prints and extended his cultural reach worldwide in his time. Although he studied art since a very young age, his greatest work occurred after the age of 60. He is famous for his woodblock print series Thirty-Six Views of Mount Fuji, which consists of 46 prints. This series included The Great Wave print, which earned him fame both in Japan and overseas. His work influenced 19th century Art Nouveau, Jugendstil, and even the larger Impressionist movement. Not only this, but he could also be considered the “founding father” of the modern Manga movement, which is still a vibrant and healthy genre to this day. Browse the Hokusai art selection Musart Boutique enlightens on precious porcelain or other high-crafted ornaments.

WHO WAS KATSUSHIKA HOKUSAI?

One of the best-known examples of the art form known as Ukiyo-e, Katsushika Hokusai has been a massive artistic influence inside Japan but also extending his reach to the countries beyond, creating an almost worldwide demand for his art in the late 19th, early 20th centuries. Hokusai’s reach crossed temporal and physical space, and many notable artists collected his woodcuts.  Because of his influences on Impressionism through his prints, as well as fostering an interest in reverence for Japanese art as a whole, Hokusai is a name that will stand the test of time.

While Hokusai’s date of birth in uncertain, it is said that he was born around October 30th, 1760 to a family of artisans in the Katsushika district of Edo.  His name as a child was Tokitaro.

Katsushika Hokusai started his craft at the age of 6, learning most certainly from his father.  By 12, Hokusai was sent by his father to work in a bookshop/library which was a building of some note for the middle and upper classes of Japanese society at the time.  There, he apprenticed as a woodcarver and remained in the apprenticeship until he was 18, where he was eventually taken in by the artist Katsukawa Shunsho, head of the “Katsukawa school.”  Shunsho, an Ukiyo-e artist (a style of woodblock printing that artists could create with) taught Katsushika Hokusai everything he knew and would eventually publish a series of prints focusing on Kabuki actors in 1779.  He continued to produce art and live at the studio for over a decade.

In 1793, following the death of his first wife, Katsushika Hokusai started to incorporate other countries’ art and explored European styles of the French and Dutch copper engravings he was able to acquire during this period of transcontinental trade. During this period, he was expelled from the Katsukawa school by the chief discipline of Shunsho, Shunko and Hokusai dubbed this as a pivotal moment in his art: “What really motivated the development of my artistic style was the embarrassment I suffered at Shunko’s hands.”

Not only did his works change, but Hokusai’s subject matter did as well – it was during this period that he became more interested in landscapes and images of daily life of the Japanese and less interested in courtesans and Kabuki actors (traditional topics for Ukiyo-e artists).

Hokusai enjoyed a long-running height for his career, even if his cultural and artistic impact wasn’t fully felt until after his death.  From the year 1800 onward, Hokusai was further developing Ukiyo-e and published more collections: Famous Sights of the Eastern Capital and Eight Views of Edo. At this time, he also began to attract students of his own, eventually teaching 50 young artists until his death.

Katsushika Hokusai continued following this calling until 1811 when he created the Hokusai Manga, a collection of sketches of various subjects including everything from scenery and animals to the supernatural and everyday life. While comprising thousands of images in 15 volumes, Hokusai’s Manga, contrary to contemporary meaning, had no connective story and were a series of unrelated images (indeed, Hokusai intended the Manga to be an instruction booklet for artists and as a method of income) – yet even taking the images separately, the life and implied stories of his subject matter remains easily apparent.

In 1830, Hokusai created the Thirty-six Views of Mount Fuji which included The Great Wave off Kanagawa as the first print of the series.  Great Wave, in particular, has become one of Hokusai’s most famous pieces, and its cultural influence resounds with us to this very day.  While known to us as The Great Wave off Kanagawa, a more literal translation could read, Off Kanagawa, the back (or underside) of a wave. This extraordinary perspective shift is instantly impressive – the towering Mt. Fuji is reduced to a mere hill under the force and power of the giant wave; considering the importance of Mt. Fuji to not only Hokusai himself, but to the Japanese as a whole, the image is a beautiful and brilliant subversion of expectations and instantly justifies the creative vision of the Thirty-six Views project.

Before Katsushika Hokusai died, at the age of 89 in the year 1849, his philosophy on art and skill would be summed up in his words, leaving us with the grand and lovely vision the artist had of himself and his future:

“At the age of five years, I had the habit of sketching things.  At the age of fifty I had produced a large number of pictures, but for all that, none of them had any merit until the age of seventy. At seventy-three finally, I learned something about the true nature of things, birds, animals, insects, fish, the grasses and the trees. So at the age of eighty years I will have made some progress, at ninety I will have penetrated the deepest significance of things, at a hundred I will make real wonders and at a hundred and ten, every point, every line, will have a life of its own.”

With his lasting influence stamped firmly onto the body of the worldwide art community, Hokusai will remain an immortal figure. His brilliant work with woodcut prints (Ukiyo-e), profoundly affected the generations that came after him, and the Impressionism, Art Nouveau and Modernism movements that followed. Additionally, he can be credited as a kind of “founding father” of the modern Manga movement, which maintains a worldwide status to this day. Musart is proud to present Katsushika Hokusai as a brilliant innovator and representative of the beautiful art form Ukiyo-e, Hokusai.