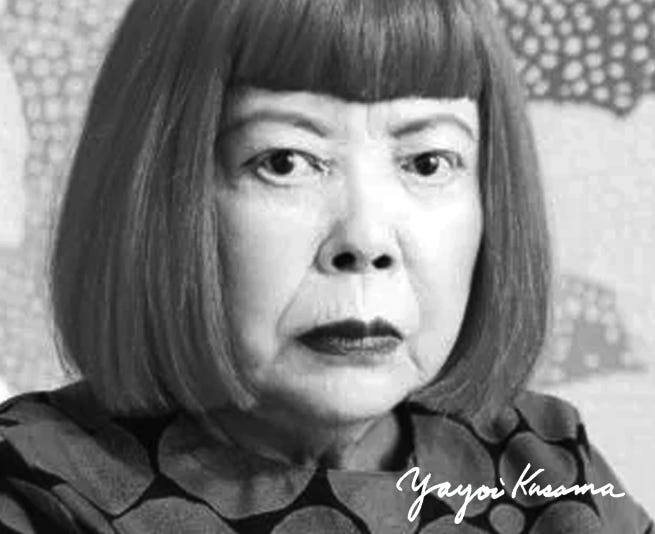 Kusama’s prolific oeuvre ranges from large paintings and sculptures to performance pieces and political demonstrations. Since childhood, Kusama has been creating works using polka dots and nets as motifs in a variety of media. During the 1950s and 1960s, she played a major role in New York’s avant-garde art scene, participating in many happenings, including an unannounced performance in the Sculpture Garden of The Museum of Modern Art in 1969. In 1973, Kusama returned to Japan. Two years later, seeking treatment for her obsessive-compulsive neurosis, she entered the Seiwa Hospital for the Mentally Ill, where she lives and works to this day. She continues to produce paintings and sculpture, and, in the 1980s, added poetry and fiction to her range of creative pursuits.

WHO IS YAYOI KUSAMA?

Yayoi Kusama’s interest in art began as a child as a result from experiencing
hallucinations that often included fields of dots, which are now part of her iconic visual language. Kusama received very little formal artistic training at the Kyoto City Specialist School of Art. Following her drive to become an artist and inspired by the rising Abstract Expressionist movement, Kusama moved to New York City in 1957. From the beginning of her artistic career, Kusama openly acknowledged her constant battle with mental illness, thus providing spectators a deeper sense of appreciation for her works of art.

Kusama’s works upon her arrival to New York City reflect the influence of the minimalist and pop art movements, such as the monochromatic series “Infinity Nets” produced in a large variety of artistic mediums. Aside from alluding to the hallucinations caused by her mental illness through the obsessive, repetitive depiction of polka dots, Yayoi Kusama also addressed a variety of themes including sexuality, identity, and antiwar ideas. Yayoi Kusama was also involved with Happenings, which were taken upon by other American Pop Artists such as Claes Oldenburg and Jim Dine. Kusama’s controversial work “Grand Orgy to Awaken the Dead” in 1969 involved painting her iconic dots on the naked bodies of some of the participants of the performance at the fountain of the sculpture garden of New York’s Museum of Modern Art. Although the work caused great controversy at the time, Kusama’s work was regularly featured in the news, including the New York Daily News. During the 1970’s Kusama returned to live in Japan and decided to live at a mental health facility and came back to the art world during 1989. Since then, Kusama has been the subject of numerous retrospective exhibitions and the recipient of prestigious awards worldwide. In 2017, Kusama opened a museum with her works in Tokyo, located near her studio and the psychiatric facility where she currently resides.