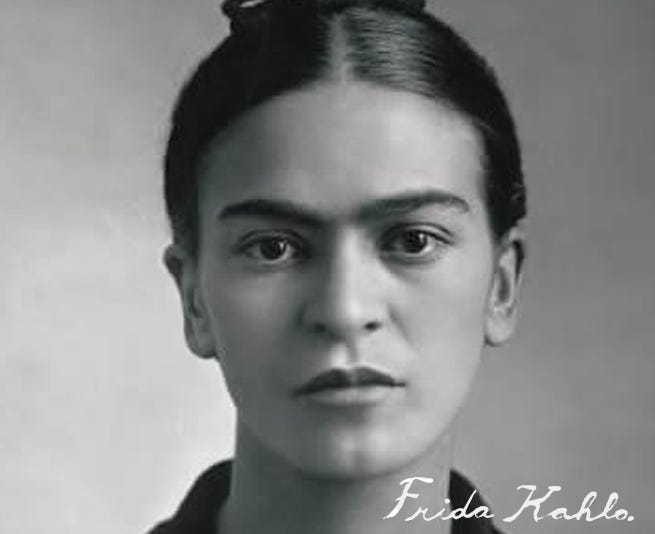 Frida Kahlo was an inspiration to a nation in a time that Mexican identity was beginning to come into its own. Frida was both a perpetual feminist icon and a monument to Latin American literature. The bulk of her work, while highly personal, also found within it a voice that spoke to an entire nation. She will always remain for her signature style and the unflinching truth conveyed by her images. Pieces of Frida Kahlo, such as The Frame illustrate how personal and important her artwork was in shaping her life. By allowing herself an outlet for her vast interior life, she brought a simple, unadulterated beauty to the real world. Often thought of like a surrealist, she would deny the title, claiming that, unlike dreamlike and subconscious imagery the Surrealists dealt with, her imagery was taken from her own life. Phenomenal talent and a highly individualistic and introspective person, Kahlo will always remain for her honesty and her deeply personal works. Kahlo inspired a nation and countless artists.

WHO WAS FRIDA KAHLO?

Unlike other artists who would gather in cliques and social circles, or even just artistic groups and movements, Frida Kahlo was unique in that she was almost completely distant from the official art scene of her time. While she was associated with many movements, such as Primitivism and Surrealism, the bulk of her work was concerning herself and her inner experience.

Art as Autobiography would be a legitimate way to see Kahlo’s body of work. Her work has inspired countless people around the world and has been profoundly influential as an example for Feminism and Post-colonial discussions.

Magdalena Carmen Frieda Kahlo y Calderón was born July 6, 1907, in a small village called Coyoacán, located just outside of Mexico City. While she claimed that she had been born in the same house she would eventually die in, (La Casa Azul, The Blue House), she was actually born in the home of her nearby maternal grandmother.

The Blue House would go on to be very pivotal for her influences and emotions, and factors in heavily to her life. Kahlo insisted that the mood around the home was “very, very sad,” and often had difficulties with her parents. Her mother’s relationship with her and her three sisters was tense and stressful, and eventually, the eldest daughter, Matilde, ran away as a teenager. The family Photography business that Kahlo’s father ran also suffered during the Mexican Revolution, causing hardships for the whole family.

Frida Kahlo contracted polio when she was six, which lead her right leg to be shorter and thinner than the left. The illness influenced her profoundly and was a large contributing factor to her reclusiveness and introversion. She would begin school later than her peers, and eventually passed a rigorous entrance examination process in 1922 which allowed her to attend the National Preparatory School.

It was here where Kahlo began to express an interest in more artistic hobbies – she would attend drawing classes and filled notebooks with sketches of all kinds. She would soon after, however, begin to work to help her family. In 1925, she began employment in a pharmacy, a factory, an engraving apprenticeship and a lumberyard.

One of the most pivotal moments in her life was the bus accident she was unfortunately caught up in. On September 17th, 1925, Kahlo was on her way home from school when the bus she was riding hit a streetcar. Kahlo was nearly fatally injured – she was impaled with an iron handrail from the bus, which went through her pelvis, fracturing many bones and causing her infertility.
Her treatment was to, essentially, lie in bed for months wearing a plaster corset – all within the family home: La Casa Azul. It was here where Kahlo began to paint, to occupy herself while she recovered. She would make many portraits of herself and her friends during this time.

After her healing process was complete, she would continue to create art and socialize with her school friends. In 1928 she would meet her infamous husband, Diego Rivera, who considered the young talent an exceptional artist. They began a relationship and were married on August 21, 1929.

Kahlo’s life was interesting, tumultuous and extremely artistically productive. After 1929, she would create more than 140 paintings and a considerable body of pure masterpieces. Her relationship with Diego would remain rocky, and they would eventually divorce, only to remarry soon after.

As for Kahlo’s specific works, The Frame stands out not only because of its purchase from the Louvre (making it the first work purchased from a 20th-century Mexican artist from a prestigious, international gallery), but because it encapsulates everything idiosyncratic about the woman herself. Using mixed medium, the portrait fully showcases Kahlo’s self-as-inspiration style, letting no detail about herself be ignored. Her personal expression through beautiful colors and true-to-live imagery will always live on as a testament to her ability to convey her inner life through her art.

Bedridden again after suffering yet once more from gangrene, Kahlo got a bronchopneumonia in 1954. She had to face amputation of her right leg, this time up to the knee once again, and she became addicted to painkillers and was “extremely anxious and irritable” during this time. She would finally pass from her illness on July 13, 1954. Her last words are written down: “I hope the exit is joyful – and I hope never to return.”

As an absolute master of Mexican art that grew the Mexican cultural identity greatly, Frida Kahlo took her personal tragedies and autobiographical facts to create wonderfully moving and rich pieces of art that remain monuments of introspection and artistic genius. While often considered a key mover for the Surrealists, Kahlo herself insisted that her work was her reality and that dreams and subconscious imagery didn’t factor into her processes.

A stunning artist with stunning works and a fierce, independent spirit, Frida Kahlo remains a giant of not only Latin American art, but the ongoing Western canon as a whole. Musart is more than proud and honored to feature the works of the absolute genius Kahlo and being able to disseminate her work and message is a privilege.