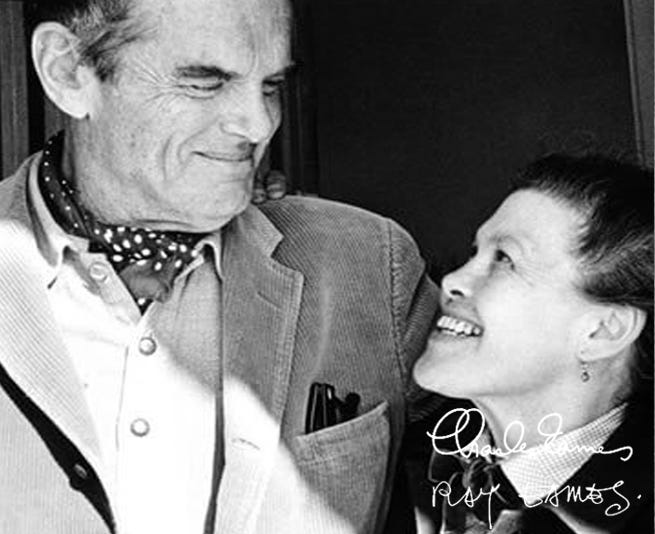 Charles and Ray Eames were 20th-century American designers best known for their groundbreaking contributions to architecture, furniture design, and industrial design. Not only they have had a prominent influence on manufacturing but on photography. They believed that design is a solution to a problem and remained true to their philosophies for their entire lives. In the first place, their work reflected the nation’s defining social movements. This husband-and-wife team based their pieces on a combination of art and science. The Eameses design architecture, process, product, style, and function ushered in a new age of design.
Their world-renowned Eames lounge chair is now in the permanent collection of the Museum of Modern Art in New York. It also stands in homes and offices throughout the world. They received many awards, including the Royal Gold Medal and the Twenty-Five Year Award from the American Institute of Architects.
Musart is proud to present their work and designs that still inspire us today.

WHO WERE CHARLES AND RAY EAMES?

Charles and Ray Eames, the mid-20th century geniuses who developed and contributed greatly to the movements of modern architecture and furniture design, are extremely influential in their spheres and well known for their work such as the Eames Lounge Chair. They dedicated a career to modern design, but also to practicality, simplicity, and aesthetics, which is easily visible in their most famous constructions. Not only did they create and contribute to their most important fields (architecture and design), they also dealt extensively in fine art and film, and industrial and graphic design. Charles and Ray Eames took the idea of modernity and shaped it into a beautiful personal vision which remains to this day.

Charles Ormond Eames, Jr was born on June 17, 1907, in St. Louis, Missouri, and was the younger of two children. He developed an interest in architecture in high school and then went on to work at the Laclede sSteel company, where he learned more about the fields of engineering, architecture, and drawing. He received an architecture scholarship and attended Washington University at St. Louis after graduating high school, but left after two years of instruction.By 1930, he had established his own architectural firm in St. Louis with his partner Charles Gray and was then later joined by an additional member named Walter Pauley. He soon after received a fellowship to Cranbrook Academy of Art in Michigan, where he eventually rose to the head of the design department.Ray Eames was born Bernice Alexandra Kaiser in Sacramento, California in 1912. She moved to New York in 1929 and graduated from the Bennet Women’s College in Millbrook, New York in 1933, where she studied abstract expressionist painting. From this time, one of her paintings resides permanently in the Whitney Museum of American Art. She eventually enrolled at the Cranbrook Academy in 1940 upon recommendations from a friend, where she met Charles Eames and the two quickly began collaborations. They married in 1941 and established a lifelong partnership – both romantically and artistically.Charles and Ray Eames then moved to Los Angeles and opened up their own design studio, and eventually received work from the Navy wartime effort, where they enjoyed the opportunity to experiment with new methods of bending and forming plywood. Everything from plywood airplane parts to molded leg splints was being designed by the two and contributed significantly to the war effort.After decades of successful collaboration and creation, Charles Eames died of a heart attack on August 21, 1978, with his wife Ray passing on exactly ten years to the day, in 1988. The two are interred together next to each other at the Calvary Cemetery in St. Louis, Missouri.

From this experience with the military, the designers went on to utilize plywood for furniture design, and began creating pieces such as Dining Chair Wood (the DCW), and the Lounge Chair Wood and Metal (LCW and LCM respectively). This utilitarian philosophy can be understood in their goal, which was that they saw upholstery as unnecessary, and by molding a shell as the seat to fit the contours of the body, one wouldn’t even need cushioning.Of course, not every design of theirs would be without upholstering, and in fact, one of their most famous pieces, the Eames Lounge Chair would be not only one of their most popular designs, but also their most expensive. This simple black leather and brown plywood construction is not only elegant in its simplicity, but also generously luxurious. Charles’ stated vision for the chair was to capture, “the warm, receptive look of a well-used first baseman’s mitt,” and the designers seemed to execute that idea entirely. Of course, since the utter success of this style of chair and due to the impact that the designers had in their lifetimes, examples of the chair can be permanently found in galleries across America – a rosewood Eames Lounge Chair and Ottoman permanently in the collection of the Museum of Modern Art in New York City, one in the Henry Ford Museum in Michigan, and another in the collection of the Museum of Fine Arts Boston. The simple fact that one can get a chair and ottoman combination permanently placed in Museums speaks highly of their accomplishments and their contributions to our daily lives! Of course, many of their other designs are almost invisible nowadays due to their ubiquity. Charles and Ray Eames Molded Plastic chair, for instance, graces everything from cafes to schools and everywhere in between, almost becoming the de-facto seating choice all across North America. It, likewise, is true to Charles and Ray Eames philosophy of simplicity and functionality, while still maintaining comfort.

Ray and Charles Eames have contributed much in the time they spent on this earth, from architectural and design revolutions to film and exhibitions, they truly had their hands in all kinds of creation and business. They have been heavily awarded, including being the recipients of the Royal Gold Medal and the Twenty-Five Year Award from the American Institute of Architects. They have even been immortalized on June 17th, 2008, in the form of a pane of 16 stamps created by the US Postal Service. Musart is proud to present Charles and Ray Eames work and designs on our website, due to their innovation, their creativity, and their brilliance.