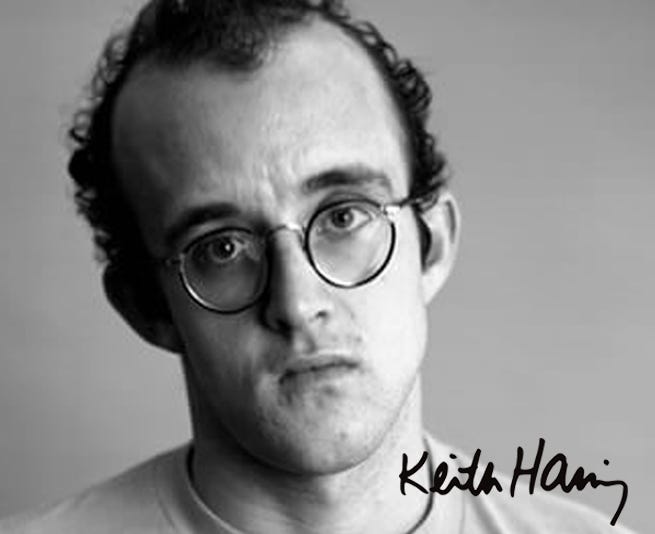 Keith Haring was a famous American street artist. His 1980’s graffiti-inspired drawings, made in New York City subway stations marked a generation and beyond. Firstly, he was interested in the colorful and subversive graffiti art of the city’s streets. Haring's signature images included dancing figures, a crawling infant emitting rays of light, a barking dog, a flying saucer, large hearts, and figures with televisions for heads. Most importantly, Haring’s work expressed concepts of birth, death, sexuality, and war. He was openly gay and was a strong advocate of safe sex. Secondly, his work turned to focus on AIDS awareness when he contracted the disease. He also established the Keith Haring Foundation to provide funding and imagery to AIDS organizations and children’s programs. Haring died by1990, but his art and influence remain legendary throughout the world. Haring’s work has a timeless effect on popularizing pop art and “low art” within the “high art” scene.  The honesty, truth and broad-reaching approachability of his works will remain integral to consider. In short, his name will always be at the forefront of a more permissive and progressive culture.

WHO IS KEITH HARING?

Keith Haring will be remembered as an activist and a champion of popular art who utilized pop culture and “low art” to establish his own voice within the Goliath of the “high art” scene such as museums and galleries. Haring drew heavily from his influences from street art, such as murals and graffiti and continually played with these concepts well into the height of his artistic fame. His simple imagery and text provide withering cultural commentary on issues such as AIDS, addiction, and illicit love, and his presence will remain within the art community – and us as a whole – for years to come.

Keith Haring was born on May 4, 1958, in Reading, Pennsylvania.  From a very early age, he developed a love for drawing that was passed on to him from his father and also from the influences of early cartoons, such as Disney and the Looney Tunes.  When he graduated high school in 1976, he enrolled in the commercial art school, Ivy School of Professional Art, but soon realized that he had little interest in working in the commercial sector.  In 1978, Keith Haring branched out and decided to concentrate on making his own art.

At this time, while working a maintenance job at the Pittsburgh Center for the Arts, he was able to explore more intimately the works of Jean Dubuffet, Mark Tobey, and Jackson Pollock, which further inspired and fuelled his own creations.

He moved to New York to study painting at the School of Visual Arts, where he explored video and performance art, as well as further honing his crafts (most notably on buildings and other public areas).

Haring’s work began in the New York subway system, where he would often work on his art in direct violation to graffiti and vandalism laws and, subsequently, was often arrested.  This lead to a rise in his popularity, and he was eventually organizing exhibitions at Club 57.  It was at this time that, “The Radiant Baby” became his symbol.

By 1982, Keith Haring was befriending many fellow emerging artists and further improving his standing in the contemporary art scene.  He frequently associated with Futura 2000, Kenny Scharf, Madonna and Jean-Michel Basquiat and eventually got to know Andy Warhol (who then became the theme of several works of his, such as Andy Mouse).

Untitled (1982) represents a key theme and period of time for Haring, in which two figures are dancing around a large, red heart.  While very mild and innocent compared to the provocative imagery he would later adapt, Untitled is playful in its depiction of two men being joyously in love with each other. At the time, of course, even this light-hearted and playful depiction was heavily against societal norms, and still garnered much controversy.

This painting symbolizes Haring’s style very much, with the heavy black outlines of the figures as well as the ‘energy lines’ signifying movement and indeed, his future works with all their elaborateness regarding theme and style would still call back to these more simple precursors. Some viewers attribute these lines to an adoption of the visual language of Hip Hop music, where visual imagery such as this was designated to represent the force of sound on listeners.  In Haring’s work, the effect is no less subtle or powerful.

Free South Africa from 1985 is a similarly black-on-white painting involving figures, but the playful nature of Untitled is dominated by the serious tones of slavery and apartheid. The work was a direct political response to the apartheid that still existed in South Africa.  A large black figure is being ensnared by a much smaller white figure in the piece, which implies the notion of a small minority of white colonizers capturing and forcing the larger black population to serve.  The irony of the image is readily apparent, and the strength and anger of the towering figure over the smaller is palpable and heartbreaking to witness.  Once again, Haring’s dramatic movement lines pervade the piece, and give shock and fear to the small white figure and notion of strength radiating out of the large, black figure – truly almost prophetic, as in this piece we can feel that the figure will fight and will be freed, “stomping” its captor.

Keith Haring also contributed works to cities all over the world, and continued his art, including selling it at his own “Pop Shop,” until his death related to AIDS complications in February of 1990.

Haring’s work will always be remembered for its honesty, truth and broad-reaching approachability.  Musart is proud to feature the works of Haring, because of not only the social commentary he offered to the progressive 1980’s, but also because of the direction he placed the contemporary art scene into.  He breathed new life into figurative painting, as opposed to the more abstract and conceptual approaches that came before him. Keith Haring proved the validity and effectiveness of street art and inspired a new movement of street-to-gallery artists.  For these reasons and much more, we are proud to host this brilliant man.