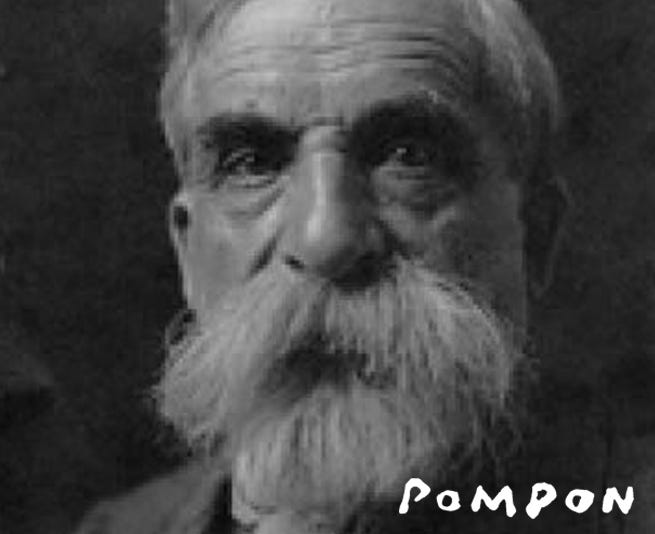 François Pompon was a French sculptor and animalier, most commonly recognized for his stylized animals. His career began as an apprentice marble carver in a funerary monument company. He soon after began studies in architecture, engraving, and sculpture. Pompon went on to study under the famous “animalier” Pierre Louis Rouillard at the École Nationale Supérieure Des Arts Décoratifs. Later on, he served as an assistant to Auguste Rodin. After completing his service to Rodin, he learned as much as he could from various other artists about Sculpting. Eventually, he had a breakthrough in 1921 with his masterpiece, White Bear. White Bear (also known as “Polar Bear in Stride”), is a huge marble sculpture located at the Musée d'Orsay in Paris. It is famous for the suggestions that come from the powerful image of the bear, such as its naturalistic weight and strength, to its slow, purposeful movements. To this day, François Pompon is still considered an influential forerunner of modern sculpture, and his intricate renderings of natural life have charmed the hearts of millions.  He has had profound effects on naturalistic sculpting and other areas of modern sculpture.

WHO WAS FRANÇOIS POMPON?

Although mostly unknown, and although he spent most of his career working with other artists, Pompon was an exquisite talent in a field of his own and is one of the best examples of naturalistic sculpting. His works have gone on to win numerous awards and are now held in many museums around the world. Upon his death in 1933, he left behind more than 300 works and there was a major retrospective of his work in 1964 in his native Dijon. François Pompon contributed greatly to the progression of modern sculpting, and he will be remembered as a pioneer in naturalistic works.

François Pompon was born in Dijon, France on May 9th, 1855. Pompon, the son of a cabinet maker, quickly began to take an interest in his father’s work and began his artistic career as an apprentice marble carver in a Dijon funeral service at the age of 15. While he flourished at the trade, he decided to pursue studies at the School of Fine Arts in Dijon to learn more about the artistic side of sculpting. By 1876, at the age of 21, he had decided to move to Paris to continue his artistic education, and he enrolled at the Ecole Nationale des Arts Decoratifs for night classes, so he could still support himself with gainful employment. Concurrently, the Franco-Prussian war was raging through the area, and because of the heavy damage inflicted upon the French capital, Pompon was able to make a living working on the rebuilding of the city. He eventually made a Salon debut in 1879, proving that his studies had been successful, and finally was able to focus more on his art.François Pompon married Berthe Velain in 1880, but history is mostly quiet on his life at this point – still sculpting and still making a living with his manual labor, he never quite met with any significant fame or renown whatsoever after getting his piece into the Salon. This changed when he met Rodin in 1890 and began studying under the great master himself. It was during this time that he cultivated his personal style and decided to focus on the animal form. During this timeframe, he slowly divorced himself from realism in his sculpture and moved to a more abstract image of the animals he wished to capture.After completing his time with Rodin in 1893, Pompon bounced from artist to artist, learning as much as he could about the craft of sculpting.  Between 1896 and 1916 he worked as an assistant for the popular sculptor Renae de Saint-Mareaux, though even after this apprenticeship when he once again attempted independence, he did not find success until 1919. The Muse de Luxembourg purchased one of the sculptures he had completed – a turtledove sculpted in stone, and following this, museums began to open up and buy more from the sculptor.

François Pompon’s most notable work and immediately following a commission by the Muse De Grenoble for three plaster works in 1921, Pompon created Polar Bear in 1922, at the age of 67. It was with this piece that the artist finally gained popularity, as the plaster sculpture became almost instantly famous. It remains today one of his most stunning pieces of work and is a permanent fixture at the entrance of the Musee d’Orsay in Paris.The lumbering strength of the piece very effectively conveys the true mass of a real polar bear, as well as its implied gait and dimensionality.  It truly appears as if it’s about to step off the placement and start to move around the area. While still hinting at the influence of Rodin, Pompon clearly has moved on from the artist, evoking a style all his own. The bear is solitary and smooth and gives you the impression that if you touched it, it would feel very real.With the acclaim he received from this piece, he was finally able to produce his works independently and created many other pieces that were equally well-received. Polar Bear was a monumental event in Pompon’s life, because not only did it give him the funds and ability to create art on his own, without needing to apprentice to anyone else, it finally vindicated the man – after a life of struggle, his efforts finally paid off, and his artistic vision was given credence in the art community.Le Cerf, a large bronze monument, was created for a plaza in Arnhem, and Le Taureau was erected in his hometown. Ironically enough, due to his sudden fame, bronze casters began to notice his influence and began to create fakes of his work, many of which being of extremely poor quality.François Pompon died in Paris, France, on May 6th, 1933, but before he did, he contributed almost his entire works to the Dijon museum – totaling over three hundred pieces of art – and he will always be remembered as a great contributor to modern sculpture.

In spite of François Pompon lack of success and popularity, Pompon’s beautiful depiction of animals with his subtlety intricate sculptures solidifies him as a prominent figure in the realm of modern sculpting. His animals have charmed the hearts of millions, and he has had direct influence on the movements that came shortly after his death. Musart loves his depictions of the animals he has immortalized in his sculptures, and we are more than happy to provide other enthusiasts with the same visual pleasure of his animals.