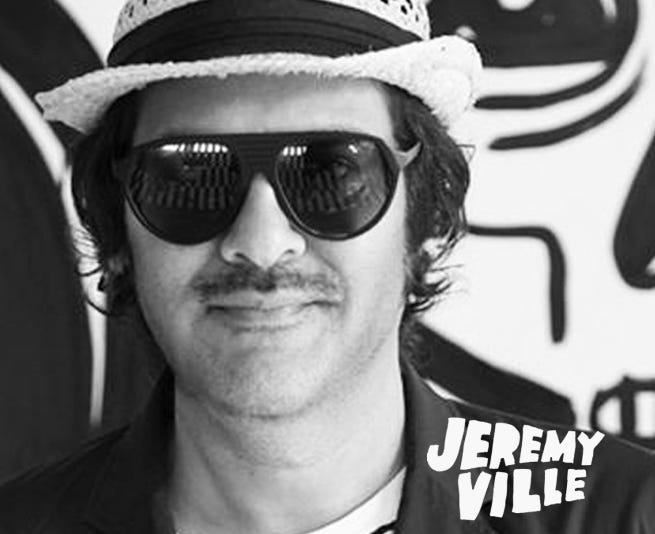 Originally from Sydney, Australia the New York-based artist Jeremyville's signature style has been featured worldwide through advertising, apparel, artworks, prints, calendar, books, and art toys. His characteristic style is defined by the immediately recognizable simplicity of his characters and thought-provoking messages. Growing up in in Australia, Jeremyville began his artistic career at the Sydney Morning Herald Newspaper and the student newspaper Honi Soit, while completing his Architecture studies at Sydney University. It was during this period that Jeremyville first discovered the power of simplicity in writing and the impact that an iconic image could have in changing the world by effectively conveying ideas. Jeremyville has exhibited around the world with shows at the Andy Warhol Museum in Pittsburg, La Casa Encendida Museum in Madrid, the Madre Museum in Napoli, Colette in Paris, Cappellini in NYC, the 798 Arts District in Beijing, and is in many private collections around the world. Recently, Steven Heller, Editor at the New York Times, featured Jeremyville in the 100 Best Illustrators in the World, published by Taschen. Jeremyville's works are also found in collaborations with Kidrobot, Converse, Swatch, Urban Outfitters, Kiehl's, Uniqlo and LeSportsac. In 1995, Jeremyville self-produced his first mass 3D inflatable designer toy and wrote his first book in 2003 titled "Vinyl Will Kill" on the world of designer toys. Published by IdN, Jeremyville also published his second book, titled "Jeremyville Sessions".
We can't find products matching the selection.
Configured Product Specifications
Filter
Filter
Filter
Artist All
Brand All
Label All