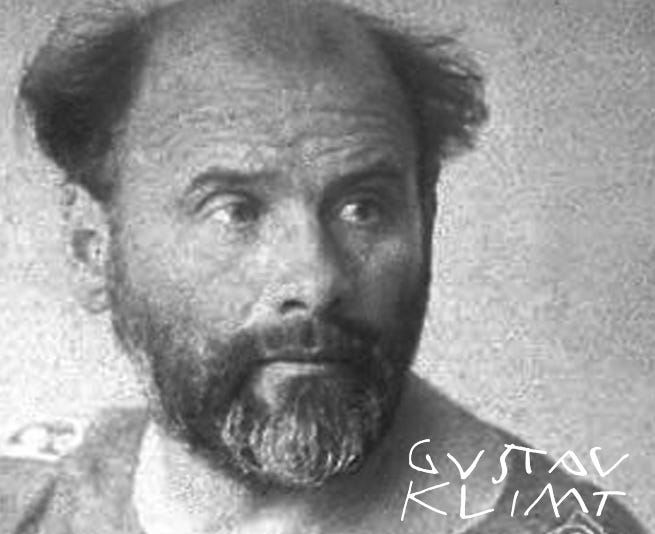 Gustav Klimt was a controversial Austrian symbolist painter during his time. Klimt’s main subject in his work was the female body and the beauty of femininity. Art community heavily criticized his art for being too sensual and erotic. Today, they’ve proven to be some of the most memorable paintings ever to emerge from the Vienna Secession movement. He furthered and advocated for the Art Nouveau movement (also known as Jugendstil in Germany). Eventually, he remains one of the most talented decorative painters of the 20th century. Klimt’s “Golden Phase” is quite possibly his most widely recognized period of art. This period emerged following positive reactions to his work and some financial success. The Golden Phase period included a large variety of paintings created with gold leaf in their production. Many of his works during this time, were very popular due to, in part, this utilization of gold with paint. While Klimt never saw much merit or fame from his work during his life, he has reached immortality in death and has greatly influenced the art community after his passing. Musart is proud to showcase the work of such a genius pioneer, who was incredibly important to the ongoing conversation of the art community as a whole.

WHO WAS GUSTAV KLIMT?

Gustav Klimt is a prominent figure in the 20th century art world, as well as a divisive one for the time. Constantly plagued by obscenity complaints and people not appreciating his work, he furthered and advocated for the Art Nouveau movement (known as the Jugendstil in Germany), and he will be remembered as one of the most talented decorative painters of the 20th century. Musart is proud to showcase the work of this genius pioneer, who was incredibly important to the ongoing conversation of the art community as a whole.

Klimt was born on July 14, 1862, in a small town called Baumgarten, near Vienna. He was the second of seven children and his mother, Anna, had ambitions to be a musical performer. Ernst Klimt was a gold engraver, thus already establishing two significant themes in Klimt’s artistic expressions – that of beautiful, graceful women and working with gold.

The family was not wealthy – Gustav Klimt lived in poverty while attending the Vienna School of Arts and Crafts, where he was an Architectural painting student until 1883. He readily accepted the teachings and techniques of the school and indeed, criticism of his early work has often been classified as “academic.”

During his stay at the Vienna School, Klimt grouped with his brother Ernst and their friend Franz Matsch and began to work together on artistic pursuits. By 1880, they had received many commissions as a team which they dubbed the “company of artists.”

In 1892, Klimt’s father and his brother Ernst both died, and he had to assume financial responsibility for both his and his brother’s family. This was a turning point in his development, and afterward, Klimt’s attention was drawn more towards the personal and less to the impersonal. During this time, he included Nuda Veritas (Nude Truth) method of looking at his art, and included the philosophy in such works as Ancient Greece and Egypt in 1891, Pallas Athene in 1898 and the titular Nuda Veritas in 1899.

In 1897, Gustav Klimt became one of the founding members and president of the Vienna Secession and remained with them until 1908. During this time, he and the Secession provided unconventional young artists with a place to bring and showcase their works as well as encourage their development. Klimt’s interest and passion for the unconventional ran through his work from birth to death and even the Viennese government supported their efforts.

Nuda Veritas is one of his defining masterpieces and defined his desire and ability to disturb the entrenched establishment. The naked, redheaded woman holds a mirror with a quote from Schiller inscribed above: “If you cannot please everyone with your deeds and your art, please only a few. To please many is bad.” This statement is completely indicative of the artist who continually subverts and protests against the established rule of more traditional art forms.

The Kiss (Lovers) was painted at the height of Klimt’s so-called, “Golden Period” where we see his love of art coincide with his past as a gold engraver’s son. Utilizing a gilded palate as he worked on his piece, Klimt achieved a dreamlike and almost divine transcription of love on a canvas. Unlike other work of his, The Kiss was enthusiastically received and almost immediately found a buyer. It’s not difficult to see why: the way Klimt depicts the love of this couple, locked in an eternal intimacy, immediately resounds with people of all ages, from all walks of life.

The Park (1909) likewise, is another stunning example of Klimt’s modernity, due in no small part to the obvious pointillism effects utilized in its creation. The foliage the painting sets itself dominates the majority of the image, and if it were not for some details at the bottom, the painting would be a much more modern, abstract piece and tells us a lot about the novel nature of Klimt’s genius. Clearly, this painting had taken Klimt ages to make and is quite obviously his most visually demanding, but unfortunately, even though Klimt drew pieces such as this often, his portraiture often overshadowed his other works.

Gustav Klimt, having received none of the merit and fame he deserved (while still finding success), died on February 6, 1918, after suffering a stroke and pneumonia, caused most likely by the worldwide flu epidemic of that same year. He was buried in Vienna and left too many paintings unfinished.