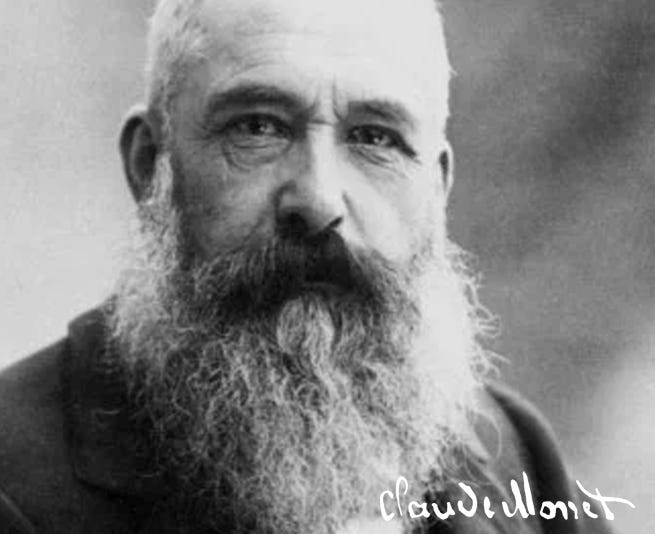 Claude Monet was considered as the French painter that founded Impressionist painting. He became world-famous in the late 20th century and an inspiration to an entire new generation of artists. Claude was raised into the Catholic church and was supposed to become the inheritor of the family business, selling ship supplies and equipment. His father was disapproving of his interest in Art and wanted his son to pursue more practical avenues. His mother, however, was a singer and supported the young Monet’s desire to become an artist. Disappointed with traditional art education in Le Havre, moved to Paris in his early twenties, where he met Charles Gleyre, Renoir, Bazille and Sisley. These artists would share Monet’s desire to set new beauty standards in conventional settings and things. The group were strongly opposed to Classicism; this desire would blossom into what we now recognize as the Impressionist movement. They worked outside, which had become possible because paint was now available in tubes). They focused on daily life scenes without symbolism or an underlying message. Of all his famous works, his series on Water Lilies is one of the most important and enduring, truly showing the depth and breadth that the Impressionist movement contained. The series is split all over the world and housed in a variety of venerable museums.

WHO WAS CLAUDE MONET?

As the incredible French painter that founded Impressionist painting, Claude Monet has become a significant milestone in the history of fine art. Historians to this day can paint, “Impression, Sunrise” as one of the most important works for the Impressionist movement, which was first shown in a Parisian gallery in 1874. Often successful during his life, unlike so many other artists who come to fame posthumously, Monet became world-famous in the late 20 th century and an inspiration to an entire new generation of artists.

Born on November 14 th, 1840 in Paris, the second son of his parents, Claude was raised into the Catholic church. Under the guidance of his father, who was in the profession of selling ship supplies and equipment, he was to become the inheritor of the family business. His mother, however, was a singer and supported the young Monet’s desire to become an artist. In 1851 he entered the Le Havre secondary school of the arts where he would develop this desire with the talent he had already shown.
An apparently very apathetic student, Claude nonetheless had enough talent to draw caricatures and portraits at the age of 15 for a modest income. He would take drawing lessons from notable teachers at this point and, in 1858, would meet Eugene Boudin who would teach outdoor techniques to the young artist. Boudin would serve as Monet’s master onward.

In 1859, Monet enrolled in the Academie Suisse and met Camille Pissarro, but was soon called into military service. In 1861 to 1862, Monet served under the Chasseurs d’Afrique in Algeria and would later ascribe much meaning to this duty. The colors and light of North Africa “contained the germ of my future researches,” he would say, and truly this attention to light and color would be what Monet vwas most famous for.

After returning to Paris, Monet would divide his time between his childhood home in the country and in Charles Gleyre’s studio, where he would go on to meet other great artists like Pierre-Auguste Renoir and Frederic Bazille. Many of the artists there would share Monet’s desire to set new beauty standards in conventional settings and things. This desire would blossom into what we now recognize as the Impressionist movement. Under the guise of a pseudonym, the “Anonymous Society of Painters, Sculptors, and Engravers” would exhibit their work independently for exposure and income.

This society was comprised of many famous artists, including: Renoir, Pissarro, Sisely, Cezanne, Degas, and Berthe Morisot, and Monet would emerge as the foremost landscape painter of the society. Interestingly enough, at the first exhibition in 1874, Monet would display Impression, Sunrise, and a local art critic intensely disliked it. Louis Leroy, in a hostile review, coined the term “Impressionism” to mean a kind of unfinished work which he deemed Impression to be. He would later regret this, but still make art history.
He would put on many other exhibitions after this, and end his collaboration with the Impressionists in 1882. This collaboration, however, inspired entire new generations of artists making Monet one of the driving forces behind impressionism. With their preternatural understanding of light on the local color of objects and the juxtaposition of colors, Impressionism is a pivotal milestone in the history of art and has been described as a beautiful, “almost ethereal” style that stands the test of time.
Of all his famous works, his series on Water Lilies is one of the most important and enduring, truly showing the depth and breadth that the Impressionist movement contained. Dedicated to tracking the changes in his water lilly pond between 1903 and 1908, this series has endured as a timeless testament to Monet’s skill and aesthetic eye. The series is split all over the world and housed in a variety of venerable museums.

With a body of work, “so extensive that its very ambition and diversity challenges our understanding of its importance,” Monet’s paintings not only created Impressionism as we often recognize it today, but also serve as a bridge from Impressionism to modern abstract art. His later works were a fundamental inspiration to Objective Abstraction and truly exerted a massive influence on the art world after his death. The instinctive, playful, and emotional tone of the Impressionist movement has moved millions around the world and the enduring legacy of Monet is still very much on display across the globe.
Even with failing eyesight, Monet was able to see the beautiful combinations of light and color in the everyday and bring them to us. This artistic sense has captured minds and hearts everywhere and has shown precisely the majesty of the natural world.