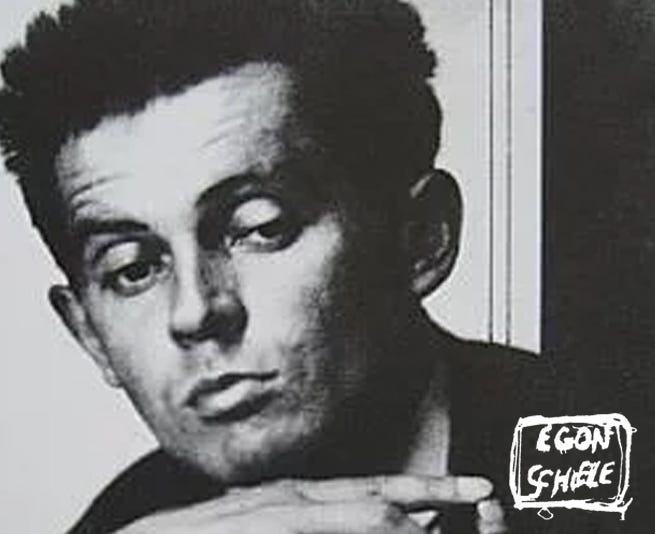 Egon Schiele was an Austrian Expressionist painter. Gustav Klimt, figurative painter of the early 20th century, was a mentor. Egon Schiele was associated but not part of the German Expressionist movement. Schiele watched the slow, painful death of his father at 15 years old after contracting syphilis. Schiele began his artistic formal training the year after his father died. He enrolled in Vienna’s Academy of Fine Art in 1906, where he became the protégé of Gustav Klimt, who invited Schiele to exhibit some of his works with his own, and those of, among other artists: Vincent Van Gogh and Edvard Munch. Although Klimt and Schiele remained close throughout their careers, and that Klimt deeply influenced Schiele’s art, he did not fully share Klimt’s inclination towards the decorative. Like Gustav Klimt and his lavish use of gold leaf, Egon Schiele also took inspiration from Byzantine religious art. This gesture resembles the blessing hand gesture of Christ Byzantine representations, such as the Christ Pantocrator fresco found at the Chora Church in Istanbul. When Schiele exhibited with Van Gogh and Munch, their emotional content made a deep impression on him. However, eventually, Schiele surpassed all of his contemporaries, including Van Gogh and Munch in the portrayal of emotional states and tormented psyches through the representation of withered bodies. During his tragic but prolific career, Schiele produced more than 3,000 paintings and drawings. Most of these paintings and drawings consist of nude figure studies of men and women in gouache and watercolor on paper. It includes approximately a hundred self-portraits. Much like other 20th-century German Expressionist artists, Schiele’s figure studies and self-portraits evidence a strong interest in emotional and psychological states. Schiele’s tragic life ended when he contracted the Spanish Flu in 1918, he was only 28 years old.