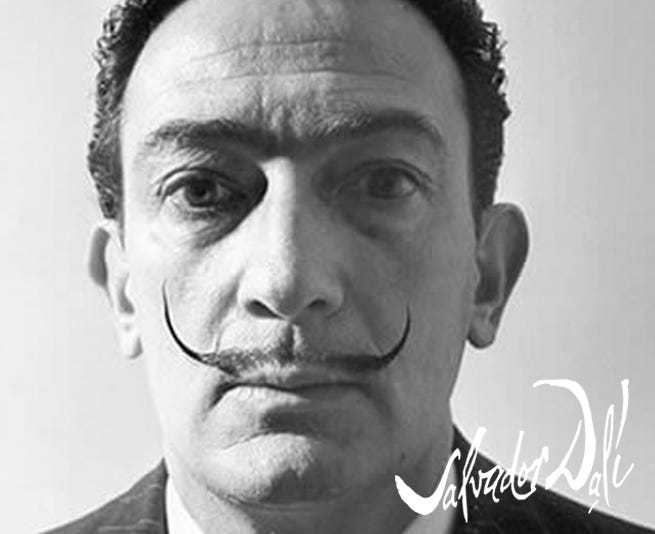 WHO WAS SALVADOR DALI?

Salvador Dali is a universally loved and recognized genius, who was a prominent (if not the most prominent) surrealist artist.  His work has survived the test of time and can still be seen referenced in various formats, including contemporary art. Dali’s cultural effect is undeniable, and the way in which he left his personalized stamp on the art world will resound for centuries to come. His eccentric manner and highly imaginative attention-grabbing behaviors in public give not only insight into the man’s works, but also insight into the man himself, endearing himself in our hearts long after he has passed from the world.

Dali was born Salvador Domingo Felipe Jacinto Dalí i Domènech, Marqués de Dalí de Pubol on May 11th, 1904, in Figueres, Catalonia, Spain. When he was five years old, Dali was taken to his older brother’s grave (also named Salvador, who had died some years before), and told by his parents that he was his brother’s reincarnation, which Dali came to believe, in time.  Images of his long-dead brother would crop up in his later works, such as Portrait of My Dead Brother.

In 1916, Salvador Dali attended drawing school, and he discovered modern painting on a summer vacation to Cadaques with a local artist named Ramon Pichot who frequented the artistic culture in Paris. Next year, Dali’s father had organized an exhibition of his charcoal drawings in their family home.  Dali’s first public exhibition was held at the Municipal Theatre in Figueres in 1919.

In 1922, Salvador Dali moved into the Student’s Residence in Madrid and studied formally at the Real Academia de Bellas Artes de San Fernando. During this time, he already drew attention to himself because of his eccentricities and his way of dress.  It was during this time that Dali experimented with Cubism, which earned him great regard among his fellow students and faculty, however in 1926, he was eventually expelled from the Academy for “starting unrest.”

During his formal art school days, Salvador Dali dabbled in various styles and the work he would continue in his life to come developed from trends that he developed at this time. From the absolute classical styles of Raphael and Velazquez to the modern influences of Picasso and others, Dali’s work flourished during this time and exhibitions of his work during this time gathered high praise and attention.

From 1929 until the beginning stages of the War in 1940, Salvador Dali worked on numerous projects and created some of his most famous masterworks. In 1929, Dali collaborated with the famous surrealist director Luis Bunuel on the film An Andalusian Dog, which he wrote the entire script for. His artistic works developed through these years, and he had important professional exhibitions that gathered much fame and press, and Dali officially joined the Surrealist group in the Montparnasse region of Paris. He remained in the group, until his formal expulsion in 1934 for “reactionary political views.”

In 1931, Dali painted the utterly genius, The Persistence of Memory, the famous work of melting clocks, which is an inherited rejection of the implication that time and memory are objective, guiding forces and are instead much more malleable than we conceive.  It is easily his most recognizable work, and has even seeped into the popular culture, most notably in an episode of The Simpsons where Homer becomes, “a well-praised outsider artist after his failed attempts to build a barbecue pit.”

The elephant also recurs during this period as an important image and can be readily seen in the great, Swans Reflecting Elephants. This great piece is foregrounded with three swans that are cleverly drawn in such a manner as to reflect downwards into elephants, causing a delightful, almost optical illusion effect. Dali himself comments on this period of creation as using his “paranoia-critical method” and explains his process as a “spontaneous method of irrational understanding based upon the interpretative critical association of delirious phenomena.” Capitalizing on this idea, this period is known mostly for his brilliant use of hallucinatory forms, double images and visual illusions which, as mentioned above, cause the viewer to almost gasp in amazement.

Salvador Dali, not only a painter but was also something of a polymath.  He successfully contributed to various art forms, among them: sculpture, theatre and film, fashion and photography, architecture, literature and graphical arts, such as lithography and etchings. His elaborate genius was evident in various forms, and he succeeded in each of them, to varying degrees – quite the accomplishment indeed!

The largest collections of his work are included at the Dali Theatre and Museum in Figueres, Catalonia and the Salvador Dali Museum in St. Petersburg, Florida, where his art will remain and inspire for ages to come.

Who can deny the legacy and impact of the genius, Dali? His mark on the world is immortal, and we at Musart acknowledge this artistic triumph and are glad to host him on our website. From the notoriously famous “melting clocks” piece, The Persistence of Memory, to lesser known, but still just as beautiful and bizarre pieces such as Swans Reflecting Elephants, Salvador Dali will be a worldwide staple for years to come. It takes a lot of intelligence and skill to be instantly recognizable, and Dali had both and used both to cement himself permanently into the artistic consciousness of the 20th century.