Abstract artist Kandinsky was an influential Russian painter and art theorist. Kandinsky "analyses on interrelation between forms and colors resulted not from random brush strokes but from the painter "inner experience. This pioneer was celebrated as a true poet who could create an aesthetic experience that engaged the sight, sound, and emotions of the public without copying nature. His spiritual approach and artistic knowledge allowed him to explore the depth of human feelings.

Major figure in twentieth-century art and the undisputed master of abstraction, Kandinsky painted "On White II" in 1923. He moved away from the lyrical levitation of free forms. Geometrical elements took on increasing importance. Triangles and circles dominate in this work to express an intelligent combination of the two main colors in the painting: black and white.  The original masterpiece is held in the collections of Centre Pompidou, Paris. 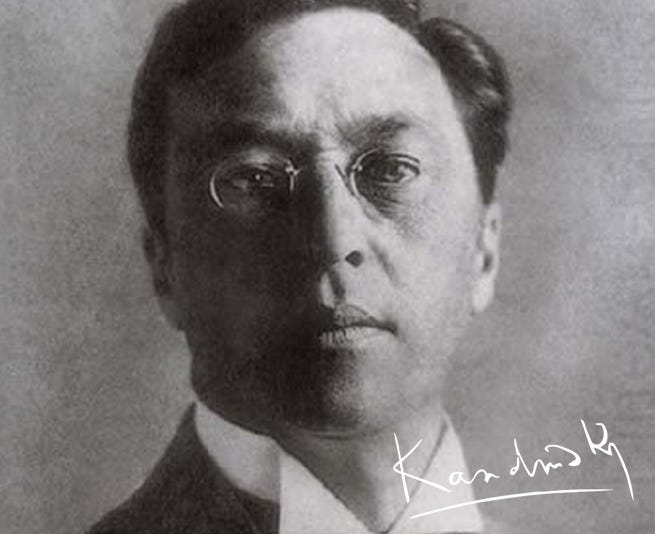 Kandinsky
Kandinsky’s eminence as one of the primary motivators of the Abstract art movement him as an artistic figure. His images are timeless and thought-provoking. Kandinsky was one of the few pioneers in the realm of abstract emotions. He wished to express spiritual truths in his art. Above all, he believed in the connection between visual art and music and the spiritual and symbolic associations of color.  He firmly believed in a spontaneous, intuitive approach to painting, and many of his works emphasize this. He played a very prominent role in the philosophical foundations for the progression of Modernism, in particular, Abstract Expressionism. Jackson Pollock, for instance, was interested in Kandinsky and his theories on the expressive possibilities in art. His influence contributed greatly to Pollock’s own career. By making the foundations for Expressionism, Kandinsky set the stage for entire movements and revolutions within the art culture of the day, with effects resonating still.
Shop All