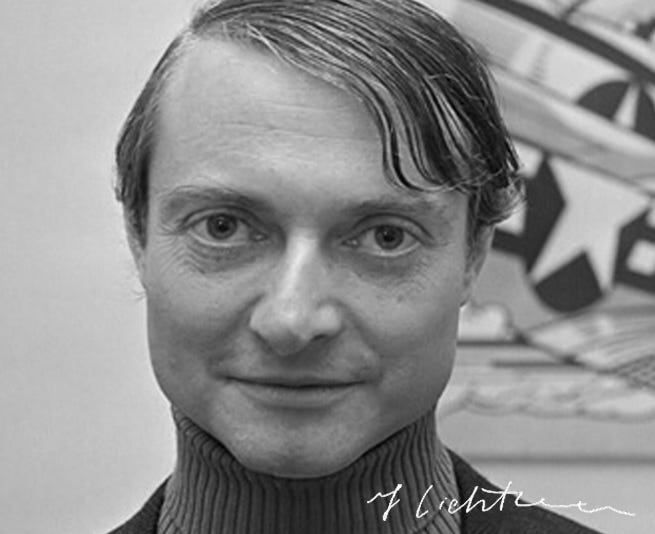 Roy Lichtenstein is one of the prime contributors to the Pop Art movement. Lichtenstein art essentially paved the way for more commercial styles of art to flourish by blending the “low” and “high” forms of art and create something new. Using comic books and advertisements as inspiration, he reimagined pop culture through a highly skilled and critical lens. Lichtenstein eventually established his own and very unique voice. One of his most effective pieces, Whaam! is a stellar example of his ability to imagine stunning works of art. Whaam! is energetic and also features his ability to create a consistent and well-composed image. The diptych has an expressive power and remains a fantastic piece of work. Lichtenstein art achieved success worldwide, yet would still often be criticized for his methods and choices of subject matter. Despite this, he remains seen as a definitive example of the Pop Art movement and a master artist in his own right.

WHO WAS ROY LICHTENSTEIN?

Another key figure in the world of Pop Art, Roy Lichtenstein paved the way for more commercial styles of art to become famous and well known. He eroded the previous belief that such art held no merit and would embrace “low” art, such as comic books and advertisements, enabling him to develop a style that would solidify his place in the artistic canon. His re-imagining of pop culture through a highly critical and educated lens would enable his influence to be felt by an entire generation of artists after him.

Roy Lichtenstein was born in Manhattan on October 27, 1923 into an upper-middle-class Jewish family to a father whose career was in real estate and to a mother who was a homemaker. He lived a normal life typical to children at the time and went to a nearby public school on the Upper West Side until he turned twelve. He attended the Dwight School and graduated in 1940, where he developed an interest in Art and Design as a hobby. At his last year of high school, he enrolled in summer classes at the Art Students League of New York and studied under Reginald Marsh.
Shortly after, he would travel to Ohio to study at Ohio State University for Fine Arts, but his studies were interrupted by World War II – he was then quickly shipped off for training (specifically, languages, Engineering, and Pilot Training), but eventually simply served the war effort as an orderly, draftsman and artist.
After being honorably discharged, he would return home and resume his studies in Ohio, where he would make significant strides in his artistic expression.
He entered into a graduate program for the arts at Ohio State and was hired on as an Art Instructor, which he would remain in for ten years.
It wasn’t until 1951 that Lichtenstein had his first solo exhibition at Carlebach Gallery, which would begin, and continue his ongoing rise to fame.
Lichtenstein became the artist we know him as today in 1961, when he began to pain the first of his pop paintings that utilized comic and cartoon imagery. These pieces of art, appearing almost commercial in their aesthetic qualities, would begin to be displayed in galleries around New York. At his first one-man show in 1962, the entire collection was bought before the show were to even open.

It was during this time that Lichtenstein art had the most success of artist career, with his most celebrated image from this time being his piece called Whaam! This highly stylized painting of a jet fighter blowing another plane out of the sky. As one of the most important and most recognizable works of Pop Art, it remains a monument to Lichtenstein’s skill and a milestone in the artistic canon. The work is praised for its energy, composition and the integration of the subjects in their two panels – an impactful and stunning work that is instantly understood.
Another of his famous works, Drowning Girl which was also created in 1963, utilizes a style that Lichtenstein would come to popularize: Ben-Day dots, which mimicked the way comic books were printed. Utilizing this technique, as well as incorporating other comic book elements into his work, like speech bubbles, his commentary on art and his amalgam of ‘low’ and ‘high’ culture became complete. This “masterpiece of melodrama” was also one of the first paintings of Lichtenstein that depicts women in unfortunate situations.
In Oh, Jeff…I Love You, Too…But… a work completed in 1964, Lichtenstein goes even more intimate – cropping the frame of the piece closely and really allowing us the feeling of intimacy with this already intimate scene. The woman, an anguished and romantic figure, gives a remarkably modern and ‘casual’ response to her lover’s declarations of love. It’s a painting that fuses high and low art remarkably, similar to his Drowning Girl but with a much more personal impact. The almost mundane realism of the scene, without the romance or fantasy usually attributed to love, is fascinating and tantalizing to see.
Later in his career, Lichtenstein would distance himself from the social scene and would buy property in 1970, build a studio, and create works focusing on different subjects, such as his Mirror period of that time. He would continue to refine his style, creating many masterworks in this time that, unfortunately, did not receive the same level of acclaim as his Pop Art, but were nevertheless works of great skill and brilliance.
A Manhattan all his life, Lichtenstein would continue to split his time between the city and Southampton until his death in 1997. He died of pneumonia at the New York Medical Center.

Lichtenstein achieved worldwide acclaim for his work and also became the face that everyone would criticize. His art, while energetic and stunning, would be called everything ranging from bland and boring to copied and plagiarized. Despite this bad reaction from some critics during his time, his work has stood the test of time and he is rightfully acknowledged as one of the most important movers of the Pop Art movement. Musart is proud to host pieces inspired by the great Pop master and showcase his work.