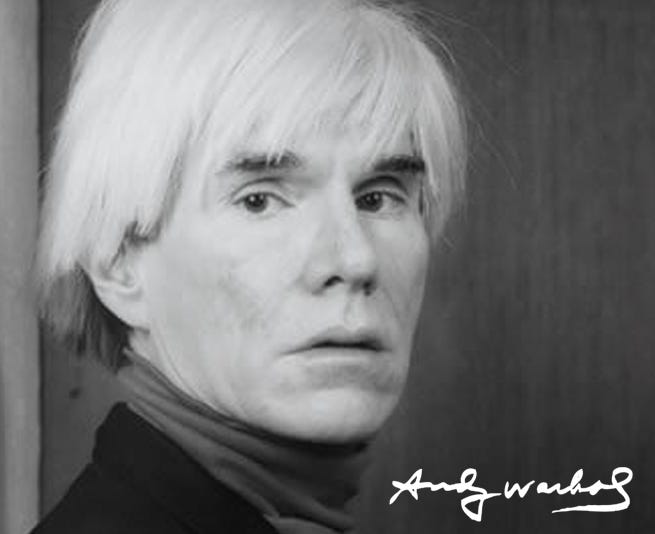 Pop Culture artwork by Andy Warhol Andy Warhol is without a doubt the first name to come to mind when thinking about the Pop Art culture. His iconic work focused mainly on celebrity culture, artistic expression, and advertisement, which were all prominent in the 1960s. He utilized a variety of media including hand drawing, painting, printmaking, photography, silk screening, sculpture, film, and music. Warhol also lived openly as a homosexual man before the gay liberation movement began. He had His Factory, where intellectuals, drag queens, playwrights, Bohemian street people, Hollywood celebrities, and wealthy patrons would collaborate. The Pop Artist produced extraordinarily valuable pieces, including some of the most expensive paintings ever to be sold. While never traditionally thought of as a popular consumer product before, Warhol’s work opened up the ideas of mass-production and mass-appeal into the art world.

WHO WAS ANDY WARHOL?

Easily one of the most recognizable and influential artists of the second half of the twentieth century, Andy Warhol created some of the most easily popular pieces of art ever produced. Challenging idealism and personal emotions conveyed by not only the abstractionist movements but by previous, more historical movements, Warhol embraced popular culture and was one of the founding fathers of the Pop Art movement.  Art was never really thought of as a popular consumer product before Warhol, and he opened the world up to mass-production and mass-appeal.

Andrew Warhol was born on August 6th 1928 in Pittsburgh Pennsylvania.  His parents were working class immigrants from (today’s) Slovakia.  In the third grade, Warhol had found out to have a nervous system disease called Sydenham's chorea, which causes involuntary movements of the arms and legs and is believed to be a complication of the scarlet fever, which causes blotchiness on the skin. He became a hypochondriac and developed a fear of hospitals and doctors due to his poor health. He would often stay at home because of this and he would listen to the radio and collect pictures of movies stars around his bed. Because of this early exposure to pop culture and celebrities, Warhol believed that this period of his life was integral to the eventual development of his art.After graduating high school at 16, he attended the Carnegie Institute of Technology, where he received training in pictorial design. He would go on to move to New York City in 1949 where he worked as a successful illustrator, his first project being for Glamour magazine, for an article called, “Success is a Job in New York.” He would continue his successful illustration career and worked for several famous magazines, such as Vogue, Harper’s Bazaar, and The New Yorker and would also produce advertising for local retailers.In the early 1950’s, Warhol dropped the ‘A’ on the end of his name and decided to attempt life as a solo, serious artist, by combining his experience in commercial art with his immersion in American popular culture. In 1952, he would showcase his first individual show at the Hugo Gallery, where he exhibited Fifteen Drawings Based on the Writings of Truman Capote.In 1960, he fully merged his artistic pursuits with his deep interest and knowledge of popular culture. These works, being examples of early Pop art, where characterized by more expressive styles that included recognizable brushstrokes and had loose affiliations with the Abstract Expressionism movement. This, humorously enough, was contrasted by subsequent works, such as Brillo Boxes in 1964 which almost eliminated any evidence of a physical artist.

In 1961, Andy Warhol would start one of his most recognizable masterpieces in the Campbell’s Soup Can paintings, where he would employ various techniques, but the predominant of them being to take the image of a can projected onto a canvas and tracing them with a pencil, and then applying paint.  Warhol would successfully take the “artist” out of art with these almost mechanical pieces. The idea to paint soup cans was given to him when a friend recommended that he paint plain objects that people see every day. These paintings remain today as a brilliant example of mass-produced art which functions almost solely as a consumer product.In 1967, Warhol would finish his Untitled from Marilyn Monroe series which took a black and white publicity photo of the actress and used this as a template to create several series of images. Warhol was deeply saddened by the actress’ death and developed these as a tribute. Another example of Warhol taking the artist out of art, these paintings were created with the help of assistants and produced at an extremely fast rate, with each Marilyn work still being an interesting experiment of dramatic color changes and blending with shadow.In 1973, Andy Warhol would create Mao, which combines paint and silkscreen of an image of Mao Zedong, created in direct response to Nixon’s visit to China at the time. The painting is giant, much akin to the nature of the complete rule of Mao over his people, and it echoes – and satirizes – the epic proportions of the depictions of Mao in China.Warhol died on February 22, 1987, due to complications from a routine gall bladder procedure.  He is buried in his home of Pittsburgh and his memorial service, which was held in St. Patrick’s Cathedral in New York, was attended by over 2000 people.

One of the most successful and highly paid commercial illustrators in New York before he even began to make art for galleries, Warhol’s emphasis on the business side of art can never be understated.  He quickly became synonymous with Pop art and emerged into high society from the poverty and obscurity of an immigrant family in Pittsburgh.  Andy Warhol was instrumental in bringing popular styles and subjects to the realms of high art and his status as a popular icon represented the new emergence of an identity of an artist – that of public celebrity.  His contributions to contemporary art movements are considerable, and we at Musart are more than pleased to contribute to the spread of Warhol’s work.