This painting belongs to a group of five pieces Miró made in 1924-1925, focused on the Catalan peasant and the region which he was originally from. The painter filled his canvas with colours, reminiscent of the Catalan landscapes. Displayed as an icon, lies the traditional figure of the peasant, wearing his beret and a wispy beard. This painting reflects not only the liberating influences of Surrealism, but also Miró "own maturity. To go further, this piece of art may also be an indirect political statement to criticize the end of the Catalan autonomy.

Joan Punyet Miró (Miró "grandson) gave his explanation about this painting in an intimate interview: "This is one of his first surrealist paintings. At the time, he was taking a huge risk as Expressionism, Dada and Cubism ruled the world of contemporary art. With this painting, Miró enters a difficult territory since he is influenced by the Surrealists and their Manifesto. This picture symbolizes the metaphysical. Miró works here in a way relying on surreal hallucinations, like dreams one has during the night. His way of painting the subliminal is close to Apollinaire's ideogram and Breton "automatic writing. It pictures a butterfly, a volcano, the earth and a well-defined red and blue planet which symbolizes the duality between conscious/unconscious, reality/fiction, landscape/nature. This is the period when Miró began to believe in himself by painting his dreams. Miró invents new codes and syntaxes. He creates a new painting, a revolutionary painting."

Miró was a Spanish painter that combined abstract art with Surrealist fantasy to create his lithographs, murals, tapestries, and sculptures. His mature style evolved from the tension between his fanciful, poetic impulse and his vision of the harshness of modern life.
In spite of his fame, Miró, an introvert, continued to devote himself exclusively to looking and creating. More details on 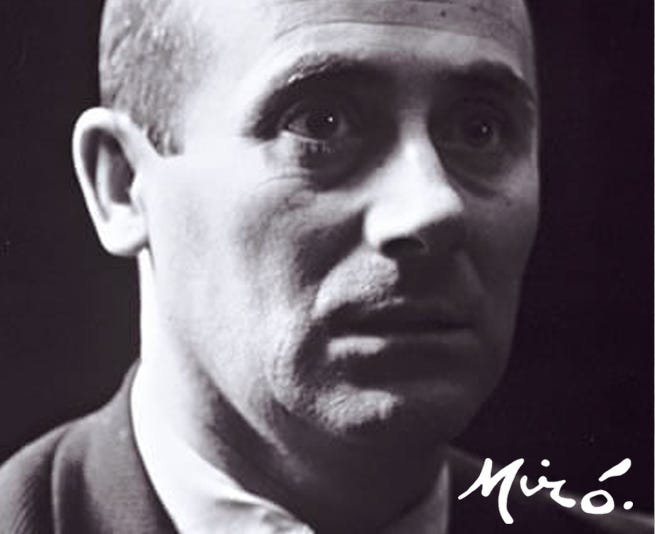