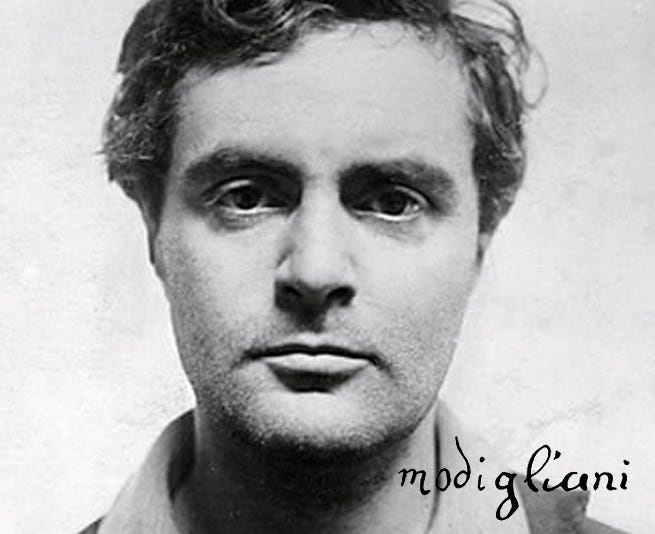 Amedeo Modigliani grew up in Livorno, Italy as the fourth child of a Jewish family. He was particularly close to his mother, who indulged the young kid's passion for art. By the time he was 14, she enrolled him with the best painting master in Livorno, Guglielmo Micheli. In 1906, Modigliani settled in Paris where he attended the Académie Colarossi. He found inspiration in Henri de Toulouse-Lautrec, Georges Rouault, Pablo Picasso, and particularly Paul Cezanne's work. In 1909, Romanian sculptor Constantin Brancusi introduced Modigliani to African sculpture and since then, this new influence impacted his art. For reinvigorating the practice of portraiture, Modigliani’s work remains one of the most significant and original of his time.

WHO WAS AMEDEO MODIGLIANI?

Amedeo Modigliani is one of the most celebrated artists of the twentieth century even if he was not known very well during his lifetime. While not associated with any particular twentieth century “-ism,” (which in itself was a bold move), his signature style fused traditional and modern European artistic developments with non-Western art forms such as African masks.  His portraits and nudes reinvigorated the traditional genres and opened up formal experimentation within them, earning the renown of contemporaries and critics. While his life was short, his contributions will last for decades to come.

Amedeo Clemente Modigliani was born on July 12th, 1884 in Livorno, Italy. As a Jew, Livorno had long been a home for the Jewish community in Italy, and his maternal great-great-grandfather immigrated to the town in the 18th century.His mother was an intellectual, born from a scholarly family of Sephardic ancestry that lived along the Mediterranean coastline – she was fluent in many languages, and her ancestors were scholars of Talmudic studies.His father was a member of a group of successful businesspeople and entrepreneurs who built and maintained his trade and eventually prospered managing a mine in Sardinia.Amedeo Modigliani had a closer relationship with his mother than his father, and his mother taught him at home until he was ten. He was riddled with health issues from a very young age, and years later he developed Typhoid Fever. In addition, when he was 16 he would contract Tuberculosis which would, in fact, later claim his life.His mother was instrumental in his interest in art, and with her guidance and assistance, he made it his vocation. She even enrolled him, after he had a brief attack of sickness, with the best painting master she could find – Guglielmo Micheli.Modigliani worked in Micheli’s art school from 1898 to 1900, and here he formed significant influences and friendships with his peers and honed and generated his work.He moved to Pietrasanta in Florence in 1903 to learn and devote his time to sculpture but found his strength diminished from sickness and was unable to give sculpture its true effort required – his frailty simply wouldn’t allow him to invest in the stone-cutting process.In Florence, he became acquainted with the work of the Impressionists, but despite moving to Venice to pursue ambitions there, he quickly found the ways of the institutions he studied at to be too traditional and disillusioning.  Growing more and more dissatisfied with the art scene near him, he finally moved to Paris in 1906.

One of Modigliani’s most famous pieces is the sculpted bust called, Head which he created in 1910-12. Although clearly inspired by the work that Brancusi did with his marble pieces, Modigliani utilized the softer limestone. This striking piece would go on to resemble a lot of his drawn works, with the elongated head and neck, as well as the simplicity of the facial features. It is only one of 27 sculptures that Modigliani created during this period.The piece stands over 2 feet tall and depicts the head of a woman donning a tribal mask. In the creation of this piece, it’s clear that Modigliani’s influence was African in origin. This paring down to simple geometric forms captures the essential and casting off all else.Another piece, his Portrait of Jeanne Hebuterne composed in 1918 is a beautiful rendition of his lover who he entered into a relationship with when she was nineteen. Less stylized than his earlier works, an elegant simplicity comes through – especially when considering the love the two had for each other, this peace takes on a haunting, placidly romantic quality that is difficult to find in other areas. The intimacy of the art is apparent and the clarity of the subject’s character, with the coy smile and the bangs dropping over her face slightly, hint towards the playful nature of the woman, and the relationship they had together.Amedeo Modigliani, despite finding true happiness with his love, Jeanne Hebuterne, died due to tubercular meningitis in 1920, and his wife decided to end her short life soon after – the day after, in fact, being unable to live without her partner.

As a prominent figure in the Ecole de Paris, Amedeo Modigliani paved the groundwork for a re-appreciation of the themes of art history: that of the nude and of the portrait.  By modernizing these two elements of art history, as well as adding an innate sense of melancholy and purposefully stylizes faces, he was said to truly reveal his subject’s inner selves.  His style was almost unique and his disavowal of other prominent artistic schools at the time only reinforces his almost brash individualism. As always, Musart is proud to showcase the works of all geniuses, especially the ones who forge their path and find their own calling, even at the expense of renown and popularity.